“Incentive – a thing that motivates or encourages someone to do something.”

There is a lot of debate on the use of incentives in Performance Based Contracts (PBC). Some argue, especially buyers from public sector organisations (e.g. state and federal governments), “why should I pay more for something that I have already contracted for?”. Alternatively, some argue that incentives should exist to reward sellers who deliver better value for money than originally tended through early delivery, reduced cost, increased capability, etc. So who is right?

For many who know me may believe that I support one of these perspectives more strongly. In fact I believe a well-considered and constructed use of incentives in PBCs offers benefits to both buyer and seller as illustrated in Table 1.

But, before we look at how to implement an incentive regime in a PBC we need to understand the range of possible incentives that are available to PBC practitioners. These fall into 2 categories; (1) performance measure incentives or (2) contract incentives. Let’s now look at each in turn.

Performance Measure Incentive.  This is the simplest and best understood of the PBC incentives. In this case instead of performance measure score stopping at 100%, it continues above 100%. Therefore, in this instance the Weighted Performance Score (see the previous article Performance Measure Weighting) would also be above 100% potentially limited (capped). This is illustrated in Figure 1. 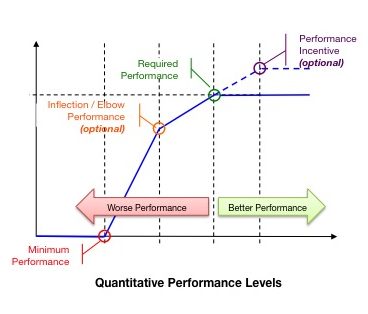 Contract Incentive – the other type of PBC incentive is related to specific contract terms. Some common ones include:

For clarity, in the case of contract incentives there are no extra payments for the current scope of work. Instead, they rely on future (or lost) revenue as a reward.

In the next article we’ll look at how to successfully apply an incentive regime to a PBC.